Scoring major blows against counterfeiting of imaging and printing consumables, ICCE and its members report on strong achievements in 2021. As part of our actions to protect honest businesses and unsuspecting customers in Europe, the Middle East, and Africa from illegal and often risky trademark infringing printer consumables, we have helped remove thousands of illegal products and offers from the markets. We have also given a strong voice against the theft of intellectual property by supporting the European Union’s upcoming Digital Services Act. For 2022, ICCE and its members will continue to work together to combat counterfeit imaging consumables.

Against the backdrop of the Covid-19 pandemic, counterfeiting trade is booming. Current estimates by OECD and EUIPO¹ say that every year, fake goods worth approximately 464 billion euros are traded across borders globally – this alarming figure, which only includes cross-border trade of counterfeits, is almost as large as the gross domestic product of countries such as Austria or Belgium. Combining the strength of leading global imaging manufacturers, ICCE members took many successful actions in 2021 to combat trade in counterfeit imaging consumables, such as toners, ink cartridges, and ribbons.

Working together, ICCE and its members effectively advocated against counterfeit imaging consumables. A prime example is ICCE’s support of the European Union’s Digital Services Act (DSA). This upcoming legislation will have a profound impact on online trade throughout Europe. Providing expert input, ICCE argued that effective measures to fight illicit trade and to protect consumers in Europe should be included in the DSA. For this, we issued a joint position paper for the imaging supplies industry and provided further feedback. Representing the industry, ICCE also commented directly to the European Commission on two occasions and met with relevant attaches to further highlight our support of this important legislation.

Looking back, we are pleased to see that much of this input, which ICCE had suggested, along with associations representing other industries, was adopted by EU officials. ICCE made it possible to support crucial legislation to protect intellectual property rights and to take a unified and powerful position in the imaging supplies industry.

The importance of strong legislation against illicit online trade is evident, as online sales of counterfeits skyrocketed during the Covid-19 pandemic. In Europe, officials estimate² half of all seized imports of fakes between 2017 and 2019 were related to e‑commerce. ICCE members accordingly ramped up their online enforcement initiatives in 2021, sharing best practices with each other, helping drive effective actions against these online sellers.

For example, one member acted against more than 44,000 infringing and misleading online listings, as well as against approximately 90 misleading websites in Europe, and removed more than 1,000 product offerings across key European marketplaces. Another ICCE member reports having triggered delistings of more than 175,000 online offers in 2021 from marketplaces across Europe, the Middle East, and Africa, including actions on leading global online marketplaces.

At the same time, many ICCE members successfully cooperated with law enforcement authorities, removing illicit products from the markets before they could be sold to customers. Using intelligence and support from ICCE members, officials across Europe, the Middle East, and Africa have carried out numerous targeted raid actions against fraudsters and seized hundreds of thousands of trademark infringing counterfeit printing supplies in 2021.

This also includes noteworthy successes where several ICCE members worked together. For example, during three extensive enforcement actions in the UAE, based on intelligence provided by HP, large quantities of counterfeit printing supplies and packaging infringing HP’s trademark were seized, these three cases also resulted in more than 150,000 items being confiscated that illegally carried the Canon brand. “When brands work together, they can deliver particularly effective actions and messages. As an ICCE member, we know the other ICCE partners are working with us”, says Glenn Jones, Director of HP’s Global Anti-Counterfeit Program. “Next to the UAE, we for example also cooperated with HP on some noteworthy seizures in Egypt. We were very pleased with these joint actions, which help to effectively protect HP’s as well as Canon’s customers”, says Alex Dodge, IP Director at Canon Europe. ICCE has already reported in detail on our recent activities in North Africa. 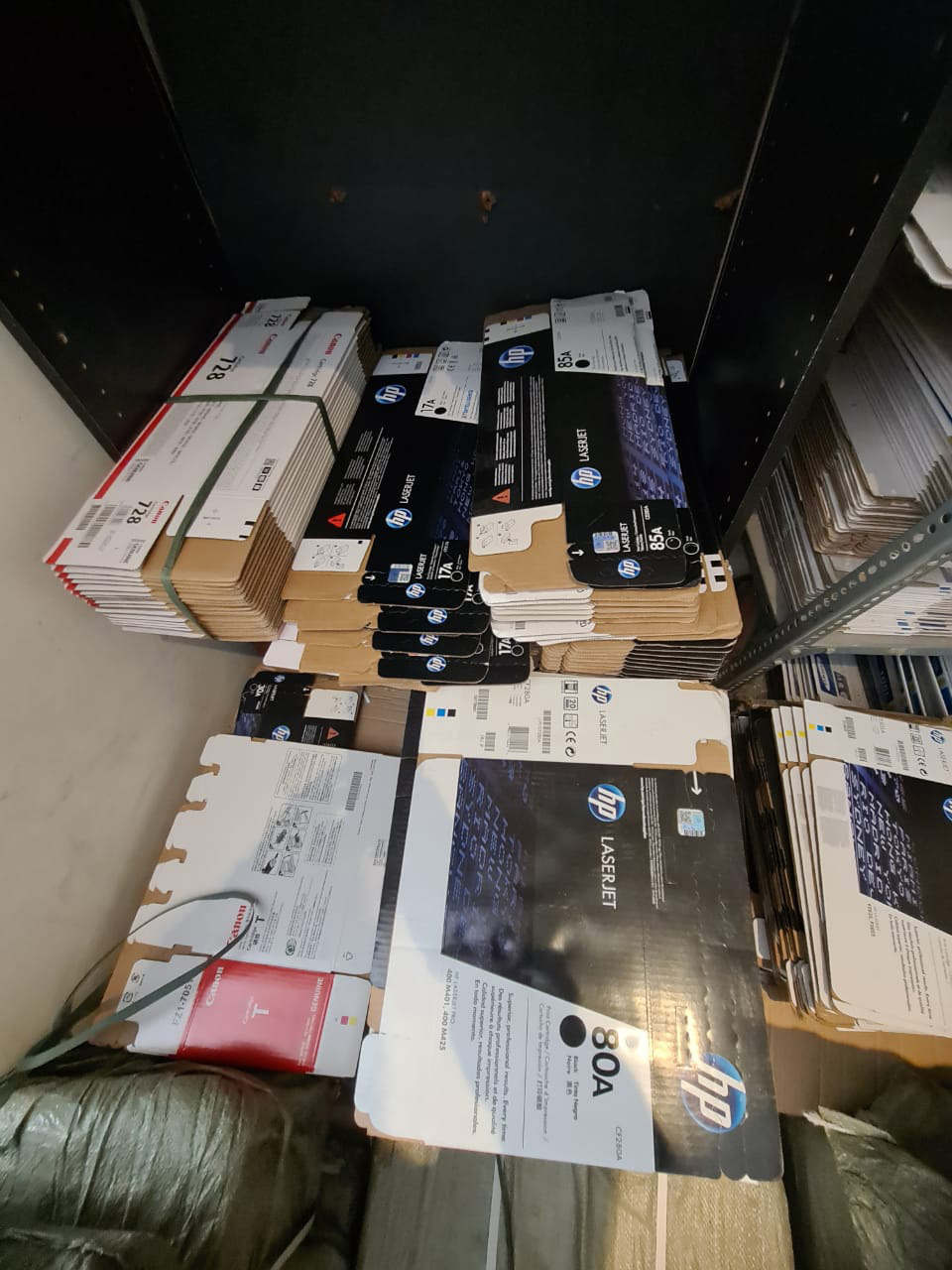 For 2022, new anti-counterfeiting activities are underway

ICCE and its members will continue this dedicated stance against counterfeiting in 2022, new activities are already being planned. ICCE will drive new communications initiatives, working to raise awareness of the risks of counterfeits for all its member brands, with dedicated articles and social media activities. Plans are in place for additional joint efforts to support law enforcement investigations and seizure activities and to drive online brand protection.

Just as in the last 25 years, ICCE will not tire to fight in our actions against counterfeiting, partnering with law enforcement, corporations, channel partners, and consumers. Stay tuned for more news at icce.net/news, or follow us on LinkedIn and Twitter.

The Imaging Consumables Coalition of Europe, Middle East, and Africa (ICCE) was formed in 1997 as a direct response to the increase in counterfeit imaging consumables across the regions of Europe, Middle East, and Africa. Imaging consumables include such products as toners, ink cartridges and ribbons. Initially created as an industry association with a focus on education, lobbying, information exchange, and awareness, it has since developed to include coordinating the role of receiving and processing intelligence information on counterfeiters, initiating joint industry raids and enforcement activities, and helping its members to target counterfeiters through the criminal and civil courts.

Members of the organisation include some of the world’s leading imaging and printing companies: Brother, Canon, Epson, HP Inc, Kyocera, Lexmark, OKI, Ricoh, and Xerox.