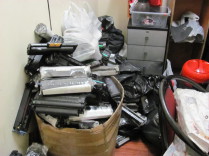 Two traders have been jailed for 21 months each in connection with the seizure of counterfeit printer cartridges with a street value of EURO 25,000. Both defendants were found guilty of forgery and counterfeiting by the Appeal Court of Athens in Greece.

The case was instigated by four ICCE members – Canon, Epson, Lexmark and Samsung – who coordinated test purchases and intelligence about the traders. A criminal complaint was prepared by an Athens-based law firm and, with the support of the Athens Police department, ICCE members instigated three simultaneous raids at warehouses in Athens and Ellinikon where the counterfeit goods were seized. The evidence was used by the public prosecutor to initiate criminal proceedings.

Following several court hearings where the traders were convicted, the case went into appeal before the Appeal Court of Athens. The court ruled in favour of the ICCE members.

As well as their prison sentence, the traders have been ordered to pay administration penalties and the counterfeit imaging supplies seized during the raids will be destroyed.

This ruling should act as a stark warning to anyone involved in the manufacturing, supply and trade of fake goods. Counterfeiting can and will be dealt with through criminal proceedings and can lead to imprisonment,” said an ICCE spokesperson.